MEDEA Awards Press Release - And the winners are...

This year the MEDEA Professional Production Award went to Multimedia Wismo produced by Nadasdy Film in Switzerland. The overall prize for the MEDEA User-Generated Award went to Labhair Linn! Cabhraigh Linn! - Speak with Us! Support Us! submitted by Edel Crosbie in Ireland. The winners were announced during the MEDEA Awards Ceremony which took place as part of the Media & Learning Conference in the Flemish Ministry of Education and Training Headquarters in Brussels on Thursday 10 March 2016.
Read the full press release 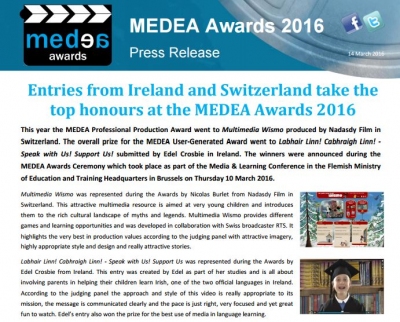