The latest issue of the Media & Learning News includes an article by Mark Reid on a Europe-wide investigation into film education provision led by the British Film Institute, an article by Ina Silvia Gray from the University of Weimar in Germany describing how she uses student-made podcasts as an intrinsic part of her teaching and an article by Predrag Pale and Juraj Petrović from the University of Zagreb in Croatia describing LeCTo a highly innovative lecture capture tool that they have developed for students in Zagreb.

It also contains news about recent publications and developments including the controversial new documentary from Beeban Kidron called InRealLife, the EU's new initiative on opening up education and a wealth of other news, notifications and announcements related to the use of media in education and training.

The newsletter also provides information about the Media and Learning Conference, the MEDEA Awards and other upcoming events. Read the full newsletter here. 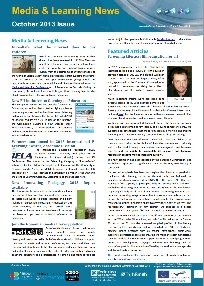