The Forward Look on Media Studies – New Media and New Literacies was designed to address some of the societal challenges posed by the profound changes in media and communication technologies and cultures over the past two decades, namely by defining a common European research agenda for media studies and specifying the institutional frameworks that would promote the organisational cohesion of media research in Europe.

The Final Conference followed closely on the four thematic workshops in 2012 which were devoted to defining challenges in key areas of research in media studies (see www.esf.org/mediastudies). The Final Report of the activity that includes research and policy recommendations, was discussed during the conference which brought together a broad audience of key stakeholders: researchers, policy-makers, practitioners and others. The conclusions of the conference will feed into the final report that is expected to be widely disseminated among academic and policy audiences in April 2013. 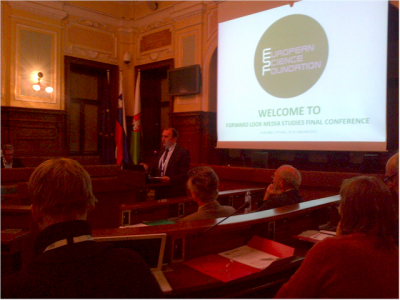