Check out the showcases of the MEDEA Awards 2013

In the last couple of weeks some of the showcases of the MEDEA Awards 2013 with interviews of the creators have been edited and published in the Media Gallery on www.medea-awards.com.
The published Award Winners are "Dans les murs de la Casbah", a webdocumentary by Céline Dréan and Université Rennes 2 and "Film English", a languages learning resource website by Kieran Donaghy.

Three of the Prize Winners have also been published. "Deutsch Lernen mit Musik" by Shirin Kasraeian-Moghaddam and the German band EINSHOCH6 won the Audience Favourite Prize with their language learning video-episodes. The Special Prize for European Collaboration in the creation of Educational Media was won by Rachel Wilson, the Titus Salt School of Bradford, UK and Amandus-Abenroth Gymnasium in Cuxhaven Germany for their film "The Young Musicians of Cuxaire". The Special Prize of the MEDEA Jury was given to "WahaTv", a WebTv made by the students of the Athenaeum Leonie Waha, their teacher Emmanuel Chapeau and Thomas Jungblut a "new media" trainer of CAV Liège, Belgium.

The other showcases of the Award and Prize winners and finalists of the MEDEA Awards 2013 will be published in the next couple of weeks. 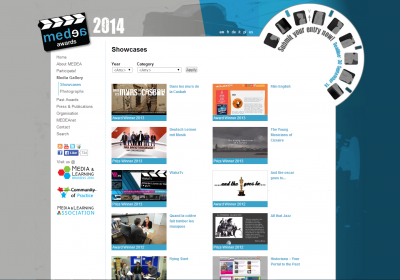