While submissions for the MEDEA Awards 2008 are being sent in from across Europe and beyond, the Organising Committee has been busy with spreading the word and contacting possible sponsors.

Two members of our Organising Committee, Clive Young (University of St Andrews, United Kingdom) and Helle Meldgaard (The Danish IT Centre for Education and Research (UNI-C), Denmark) gave an engaging and excellent presentation about the MEDEA Awards 2008 at the DIVERSE 2008 Conference.

This conference was organised in Haarlem (the Netherlands) by MEDEA partner DIVERSE, which stands for Developing Interactive Visual Educational Resources for Students Everywhere. In their presentation Clive and Helle give an overview of the trends in video and multimedia and how we can use these for education.

They also refer to the MEDEA press release (23th May 2008) in which the Prize Sponsorship was announced. Five finalists will be invited to the Award Ceremony that will take place on 4 December in Berlin and will have the chance to win the first MEDEA Award. Prizes for 2008 will include the award itself and hardware to the value of 6,000 Euro.

The recorded presentation can be viewed online thanks to Collegerama, where a list of all presentations is available.

The call for MEDEA Awards 2008 closes 30th September 2008. More information can be found on the MEDEA Awards web site. 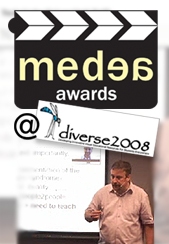