Last Call for Participation for the MEDEA Awards 2008

ATiT is a proud founding member of the MEDEA Awards 2008, which just announced its last Call for Participation in a press release.

The MEDEA Awards 2008 is entering its final weeks for accepting submissions as the closing date for submissions is 30th September 2008. The MEDEA Secretariat, which is organised by ATiT, has already received submissions from 15 countries and the number is growing. This is the final chance for those among Europe’s educational and creative professional producers, amateurs, supporting staff, students and teachers to submit an educational project in which media (moving images, sound, media-rich applications, virtual simulations …) plays a vital role.

Five finalists will be invited to Berlin for the Awards Ceremony on Thursday 4th December 2008, where they will have the chance to win the first MEDEA Award. Prizes for 2008 will include the award itself and hardware to the value of 6,000 Euro.

You can download the press release (PDF) and visit the web site for more information: 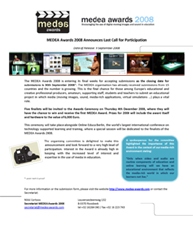