We have just published a press release to announce the renewed MEDEA Awards 2012 website and this year's closing date: interested participants are invited to submit their entries online before 17 September 2012. The five award categories include special prizes such as one for European Collaboration in the creation of Educational Media 2012 and one for Educational Media Encouraging Active Ageing and Solidarity between Generations 2012.

Event organisers that would like to promote the MEDEA Awards can also order a free batch of promotional leaflets available in Bulgarian, Dutch, English, Estonian, French, German, Greek, Italian, Polish, Romanian or Spanish through the MEDEA Awards Secretariat.

This press release is available as a separate download in English, Dutch, German, Italian and Spanish on http://www.medea-awards.com/press-and-publications#press-releases. 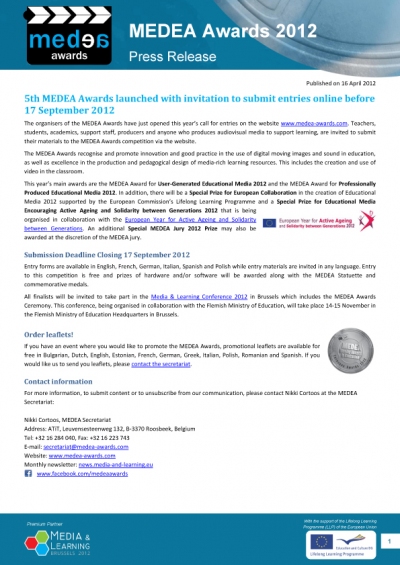