“Et si nos villes avaient des ailes?” is a TV documentary directed by French director Jean-Baptiste Mathieu, that tries to answer questions about how we will travel around our cities of tomorrow. Utopians, scientists, planners and politicians from several countries in Europe explore amazing options and perspectives for the city of the future  in this video. The film takes viewers through different European cities, that are reinventing modes of travel. Belgian visionary architect, artist and utopist Luc Schuiten inspired the film makers to explore the limitations and possibilities of mobility. The video programme is a co-production by France Televisions, ERE Production and VIDEOSCOP Université Nancy 2 in partnership with Service Audiovisuel et Multimédia de l’Université Paul Verlaine – Metz. The video will be screened in 2010 on French television before it will commence its distribution online and in academic and education communities, supported by ATiT. 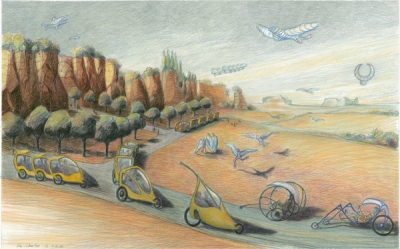