The Women's Dialogue is a 3 part series of virtual dialogues starting on 22 January 2009 featuring live interviews and participation of current and former female Heads of State including Madam Ellen Johnson Sirleaf and President Tarja Halonen interacting with a global audience of future leaders. The purpose of these dialogues is to produce recommendations and solutions on how to break down barriers to leadership which will be presented to the Women’s International Colloquium being held in Monrovia, Liberia March 7-8 2009.These dialogues are facilitated through the GDLN network of centres and are being produced by ATiT. 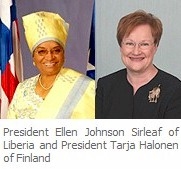